FOUNDATION FOR A SMOKE-FREE WORLD: Confusion about Quitting Options Impacts the Health of 1 Billion Smokers Globally 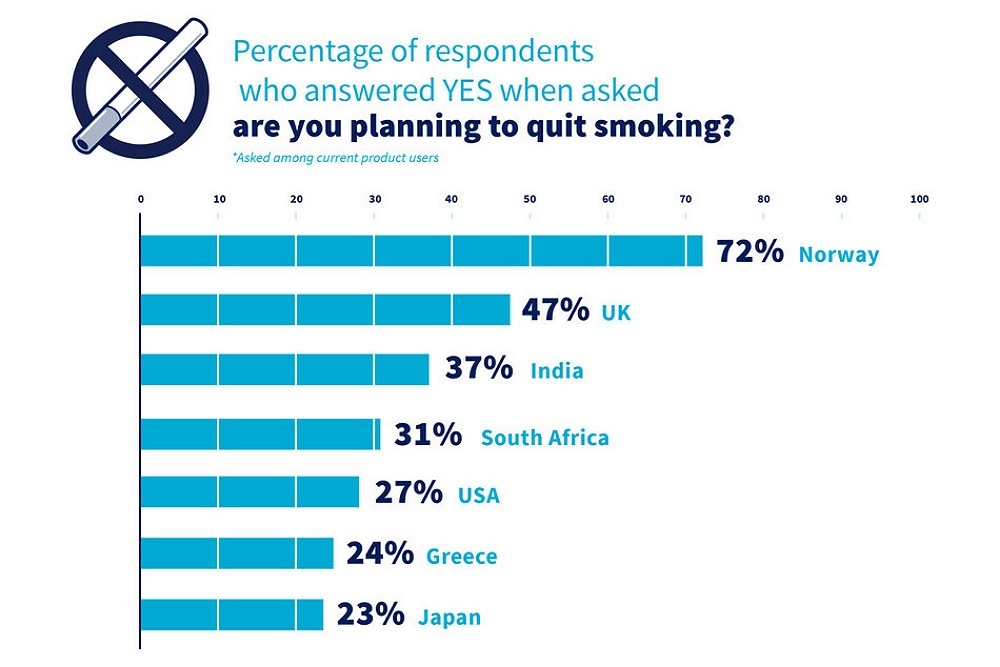 Foundation for a Smoke-Free World issued the following announcement on March 12.

Among tobacco smokers around the world, there is a growing misperception that e-cigarettes are equally or more harmful than combustible cigarettes, according to the Global State of Smoking Poll released today by the Foundation for a Smoke-Free World (FSFW). In four out of seven surveyed countries (United States, United Kingdom, South Africa and Norway), more than half of current smokers reported this perception. In the remaining countries (Japan, Greece, and India), a significant population of smokers (25-50 percent) also reported this belief.

According to FSFW's previous poll, in 2017 an average of 50 percent of smokers believed that e-cigarettes are less harmful than combustible cigarettes. The latest poll suggests that the number of smokers holding this belief has dropped by 5-14 percent in the United States, United Kingdom, South Africa and Japan. India experienced a 15 percent increase in the belief that e-cigarettes are less harmful and was the only country in which this perception became more common. (Perceptions were unchanged in Greece and Norway was not surveyed in the prior study).

Many of the respondents lacked awareness of the specific health risks related to the use of combustible cigarettes and harm reduction products. In six out of the seven countries, more than half of those surveyed incorrectly identified nicotine as the primary cause of tobacco-related cancer (in the seventh country, Greece, 45 percent held this misperception). Nicotine causes addiction-but most medical researchers agree that it is not a carcinogen. Tar contains the primary carcinogens in combustible cigarettes.

The belief that nicotine causes cancer was most common among respondents in South Africa (77 percent), India (69 percent) and the United States (57 percent).

"Despite the growing body of evidence that alternative nicotine products such as snus and electronic cigarettes pose significantly less risk than combustible products, public perceptions are moving in the opposite direction," said Dr. Derek Yach, president of FSFW. "Sensational media coverage and targeted efforts by those opposed to tobacco harm reduction are distorting the facts and keeping many of the world's one billion smokers from making better choices for their health."

The Global State of Smoking Poll surveyed the smoking habits and perceptions of more than 54,000 current and former tobacco and tobacco harm reduction users. It was conducted in the United States, United Kingdom, India, Japan, Norway, Greece, and South Africa between June 17 and August 19, 2019.

Global Smokers Continue to Be in Denial

While the majority of the world's smokers live in low and middle-income countries, smokers in higher income countries have been most active in attempting to quit. Smokers in countries such as Norway (83 percent), United States (75 percent) and United Kingdom (72 percent) have made a serious attempt to quit, while fewer in India (50 percent), South Africa (39 percent), and Greece (37 percent) have made such an attempt. Even with an understanding that smoking is harmful, less than half of current smokers in six of the countries planned to quit. Smokers in Norway were the outlier, with more than 70 percent of smokers planning to make an attempt.

Globally, smokers continue to pursue a variety of approaches to quitting. Very few smokers have attempted to quit using nicotine replacement therapies (NRTs), such as patches or lozenges, or alternative risk products (ARPs), such as heat-not-burn products. Less than 38 percent of smokers in six countries have tried NRTs and less than 25 percent have tried ARPs in these countries. Norway was the only country with a significant number of current smokers who have attempted these methods (48 percent with NRTs, 53 percent with ARPs). Former combustible smokers in Norway also reported the greatest success using these methods to quit (41 percent with NRTs, 55 percent with ARPs).

The Global State of Smoking Poll 2019 serves as a follow-up to a similar poll conducted by FSFW in 2017 and provides a benchmark for evaluating the success of international tobacco control efforts. This poll also provides an understanding of the experiences and challenges of smokers, their habits, and their perceptions of the risks associated with tobacco products and alternative nicotine delivery systems.

About The Foundation for a Smoke-Free World

The Foundation for a Smoke-Free World is an independent, US nonprofit 501(c)(3) organization with the purpose of improving global health by ending smoking in this generation. The Foundation supports its mission through three core pillars: Health, Science, and Technology; the Agricultural Transformation Initiative; and Industry Transformation.

The Foundation has received contributions from Philip Morris International (PMI) in 2018 and 2019 each in the amount of US$80 million. PMI has pledged to contribute $80 million annually for the next ten years. Under the Foundation's bylaws and pledge agreement, PMI and the tobacco industry, generally, are precluded from having any control or influence over how the Foundation spends its funds or focuses its activities. The Foundation's acceptance of the contributions does not constitute an endorsement by the Foundation of any of the pledger's products.

Foundation for a Smoke-Free World