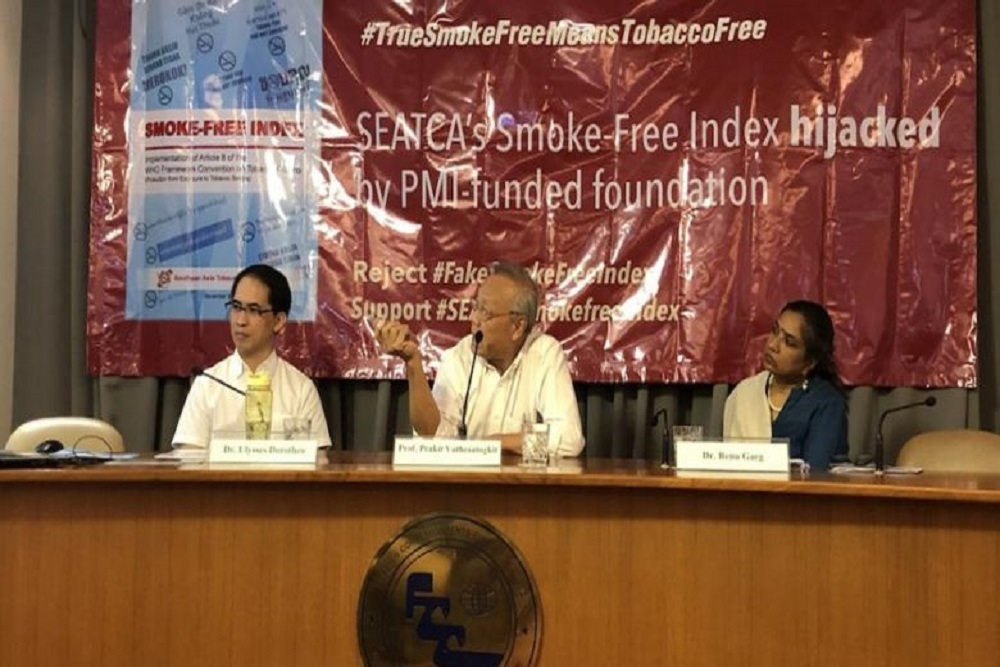 SEATCA developed its Smoke-Free Index to assess implementation of smoke-free policies in all Asean countries in line with the World Health Organization Framework Convention on Tobacco Control (WHO FCTC).

First published in 2016, the Smoke-Free Index was updated in 2017, and another update will be released this year.

Both PMI and FSFW have hijacked the globally accepted use of the term “smoke-free” and delimited it to mean “cigarette-free”, referring to PMI’s heated tobacco products (HTPs) and electronic nicotine delivery systems (ENDS), often referred to as e-cigarettes, SEACTA claimed in its press release which was made public on Sunday.

These new products are promoted as supposedly safer alternatives to traditional cigarettes, reminiscent of cigarette filters and “light” or “low tar” cigarettes that were promoted by tobacco companies to give false reassurance to smokers that these reduced their risks of health harms.

In March, the FSFW announced it had appointed a research company, Euromonitor, and a think tank, SustainAbility, to develop the first ever Smoke-Free Index, which would evaluate actions of 15 tobacco companies to shift from conventional cigarettes to alternative “smoke-free” products.

Two months earlier, in January, FSFW filed a trademark application with the United States Patent and Trademark Office for ownership of the mark “[Smoke-Free Index]”.

Similar trademark applications have also been filed in the EU, Switzerland, the UK, Australia, China and Canada.

“Considering that SEATCA’s Smoke-Free Index was first published in 2016, FSFW’s use and trademarking of the term “Smoke-Free Index” is misleading, potentially confusing, and tantamount to wrongful appropriation of SEATCA’s intellectual property,” said Dr Ulysses Dorotheo, Executive Director of SEATCA.

“Conveniently, these actions of FSFW address a PMI concern that was identified in a 2014 PMI Corporate Affairs presentation made public by a Reuters investigative report in 2017: “We’re still building Asean-wide counterweights to SEATCA, the major ATO [anti-tobacco organisation] in Asia.

“With this copycat Smoke-Free Index, PMI is therefore able to hit two birds with one stone,” Dorotheo added.

News of the FSFW’s Smoke-Free Index has been met with scepticism by tobacco control campaigners and financial investors. Very recently, government and civil society rejection has led to the cancellation of regional dialogues organised in Turkey and Thailand by SustainAbility intended to inform this copycat index. Given PMI’s aggressive promotion of its HTPs and ENDS, health advocates suspect that the report will be an annual PR gimmick to endorse PMI and its non-cigarette sales, even as PMI continues to aggressively and simultaneously promote conventional cigarettes.

“Dicarbonyls (glyoxal, methylglyoxal, diacethyl) and hydroxycarbonyls (acetol) also are thought to be important compounds in the aerosol. Many of these substances are toxicants that have known health effects resulting in a range of significant pathological changes.”

Similarly, the WHO reiterates that all forms of tobacco use are harmful, including HTPs, because tobacco is inherently toxic and contains carcinogens even in its natural form.