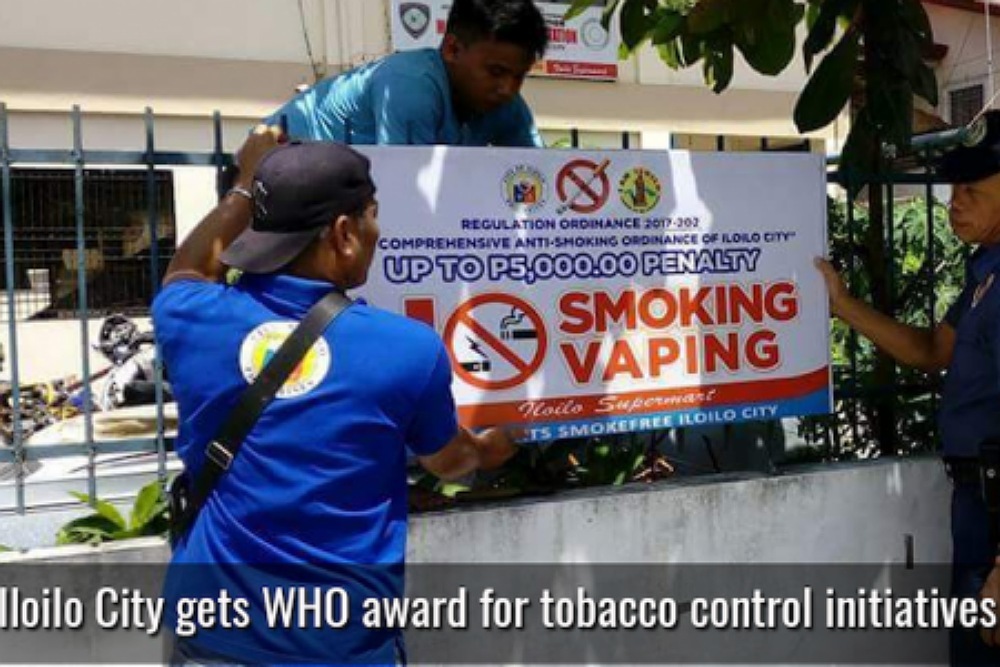 The World Health Organization (WHO) has named Iloilo City as among the recipients of the 2019 World No Tobacco Day Awards (WNTDA) for its accomplishments on tobacco control.

“There are only five countries (in WHO Western Pacific) that were given the award. And Iloilo City is the only awardee from the Philippines. We were just informed but we still don’t know if when is the awarding,” said Dr. Bernard Caspe, chief of the Iloilo City Health Office (CHO), in a press conference Monday.

Caspe said they are now in possession of the certificate and are still waiting for further communication where to claim the gold medal award.

He said the award was based on the initiatives that were taken by the city government through the CHO on tobacco control.

Among its prominent initiatives was the establishment of a smoking cessation clinic, which in 2018 was able to counsel 4,443 patients. In 2017, they counselled 3,592 smokers.

“Probably 10 to 15 percent of them quit smoking but sad to say there are those who continue smoking. Probably they stop temporarily but then they go back to smoking,” he said.

The CHO hoped to double the number of smokers who would get counseled. During the sessions, they are briefed on advantages of being a non-smoker.

“When we talk of smoking, we are not talking about the person per se but the whole family, friends, officemates and those people around him who can be second hand smokers. The effect is almost the same as that of smokers,” he explained.

Caspe added that right now, they are lobbying at the Department of Health (DOH) to have smoking cessation clinics in the city’s nine district centers.

The centers, he said, are already capable to handle counseling.

“Doctors have to be trained for that purpose. I hope we can also lobby at the council and the mayor’s office about the nicotine replacement therapy,” Caspe said.

Also pending at the Sangguniang Panlungsod (SP) is the proposed ordinance on preferential hiring that recommends for the city government to preferably hire non-smokers, or smokers have to be willing to undergo counseling sessions.

If the proposed ordinance is approved, Iloilo City will be the first local government unit to adopt the preferential hiring.

Caspe also revealed they also prepared a letter addressed to the Liga ng mga Barangay to pass an ordinance for smoke-free barangays.

Under this concept, it will be prohibited to purchase from stores cigarettes that are sold individually and must be in packs. It is also prohibited to light in sari-sari stores, and they can do it at the backyard of their homes.

“Later on, we look forward to smoke-free homes,” he said.

He explained that with this, smokers could not light cigarettes inside their homes because members of their families will be victims of second-hand smoke.

Caspe explained that the effect of second-hand smoke is almost the same with that of the smoker. Among these are respiratory illnesses such as bronchitis, pneumonia, lung cancer, among others.

Meanwhile, Senior Health Program Officer John Richard Lapascua, of the Department of Health –Center for Health Development (DOH-CHD) Western Visayas, said that Iloilo City has been a model local government unit of the country in terms of the implementation of tobacco control.

“The award is very prestigious because if we think about it at the WHO Western Pacific Region, only five of them are awardees.  We are very proud of what the Iloilo City government has accomplished and this will serve as one of the model LGUs and hopefully, other LGUs in the country will emulate the efforts and accomplishments of the city government with regard to tobacco control,” he said.