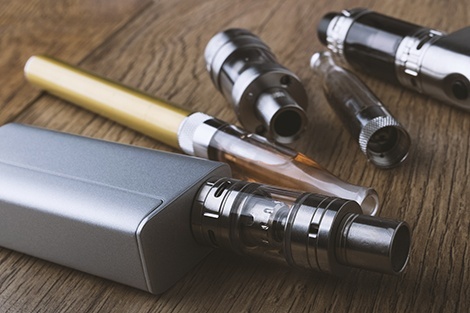 Electronic cigarette products looked at in the study were both cartridges and e-liquids and researchers said that exposures to the fungi and bacteria could cause reduced lung function, asthma and inflammation.

“Airborne Gram-negative bacterial endotoxin and fungal-derived glucans have been shown to cause acute and chronic respiratory effects in occupational and environmental settings,” said David Christiani, Elkan Blout Professor of Environmental Genetics and senior author of the study. “Finding these toxins in e-cigarette products adds to the growing concerns about the potential for adverse respiratory effects in users.”

Leaders in the e-cig industry begged to differ, saying the tested products were old, and the findings were still outweighed by the health benefits of e-cigarettes compared to traditional cigarettes.

“These studies are skewed and state that they found trace amounts of harmful ingredients in several of these products but as everyone knows the toxicity of any product is determined by the dosage. Clearly compared to a conventional cigarette we have dramatically lowered the risk by 95 to 99 percent.

“It’s clear that cigarettes are here to stay unless a better more effective product eliminates the old. E-cigarettes are doing this at a faster pace than ever before.”

Gregory Conley, the president of the American Vaping Association, also weighed in.

“This data is based on ancient products that were in use six years ago, meaning that modern devices like JUUL were not studied,” Foley told Tobacco Newswire.

“Bacteria and other toxins are found in traditional cigarettes, almost assuredly at much higher levels than found in this study. With many adult smokers now mistakenly believing that vaping could be as dangerous as smoking cigarettes, it is disgraceful to release this study without an adequate comparison to cigarettes.

“Nothing in this study will change the conclusions of respected organizations such as the Public Health England and the Royal College of Physicians, both of which have estimated vaping to be at least 95 percent safer than smoking cigarettes.”

However, stringent regulations were favoring old, established manufacturers over smaller innovators, he said.

The Federal Drug Administration has placed a chokehold on the category and the new and improved technologies can’t make it to market without it becoming very expensive, he said.

“Only Big Tobacco and Big Pharma have the financial capabilities to get this done. This is killing all of the smaller players where innovation is the driving force,” Story said.

“We should embrace this product and not stifle growth so that we can eliminate the 8 million deaths caused by smoking.”

The study was published online in Environmental Health Perspectives on April 24.

“In addition to inhaling harmful chemicals, e-cig users could also be exposed to biological contaminants like endotoxin and glucan,” said Mi-Sun Lee, research fellow and lead author of the paper. “These new findings should be considered when developing regulatory policies for e-cigarettes.”